Abusing DMA for fun and LEDs

This blog post assumes you know the basics of multiplexing and how an LED matrix works. The end result looks like this:

Let’s say you want to control an LED matrix. A plain boring 8*8 LED matrix you bought on Ebay a long time ago and is still somewhere in your desk. It’s pretty simple, after figuring out how multiplexing works you’ll have a smiley drawn on the LED matrix in no time at all. But it’s much prettier if the brightness of an LED matrix can be controlled via PWM, maybe make some nice animations as well. For an 8*8 LED matrix, 8 PWM outputs would be needed and you are good to go, something a bigger microcontroller generally has available. But what if you want a bigger LED matrix, 16*16 perhaps. And animations running smoothly at a high frame rate.

For an 8*8 LED matrix, to make it look smoothly, you need to multiplex the screen at about 100 Hertz minimum. So set a column, wait a short time, switch to the next column and set the value for this column, wait a short time etc etc. With 100Hz there is 10ms of time per screen, so about 1.2ms (10ms / 8 columns) per column. More then plenty to set some IO pins to show an image. For a 16*16 LED matrix this time halves to 0.6ms. PWM makes this a bit harder, as a whole PWM cycle must fit in this 1.2 or 0.6ms, meaning the PWM peripheral must run at 833 or 1666Hz minimum. This is all no problem for a PWM peripheral in a modern microcontroller.

But what if you don’t have 8 or 16 PWM pins? For example, an Arduino Mega has 12 PWM pins. ARM M microcontrollers like the STM32F103 have more PWM pins, but those are shared with other peripherals as well, so they might not all be available to use in a project.

An option is to bitbang PWM, toggle an IO pin quick enough to act as an PWM pin. This has the major downside of costing a massive number of CPU cycles. To get just 6 bit PWM, so 64 different levels of brightness, in the 0.6ms for an 16*16 LED matrix, the CPU must check 64 times if that IO has to be set high or not. This means that every ~10us the CPU has to handle IO. If you also want to calculate some animation to display, the CPU will be very busy.

This is where the DMA comes in. The DMA, or Direct Memory Access, is a peripheral available in many modern microcontrollers. Simply said, it’s a co-processor that can copy data from one place in the microcontroller to a different place without the CPU having to do a thing. It can be used to transfer an ADC value to a buffer in RAM and give a sign to the CPU when the buffer is full. The microcontroller I’ve used for this blog, the STM32F103, can transfer memory to memory, peripheral to memory and memory to a peripheral without the CPU doing a thing apart from setting up the DMA. Transferring data to a peripheral without costing CPU cycles. That sounds like a nice way of driving an LED matrix.

Let’s try to display something simple first, setting column 1 at a low brightness, column 2 a bit higher then column 1 and continue to column 8. This all with a 4 bit PWM, so 16 possible levels of brightness. 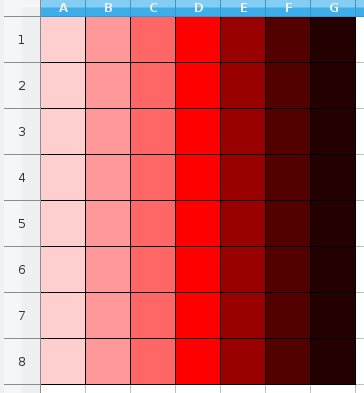 A buffer in C for that would look something like this:

This is just for 1 column, the full array for an 8*8 LED matrix would look like this:

But this only takes care of generating PWM. After every 2^numofbits bytes, 16 in case of 4 bit PWM, the columns must be switched. First select column one, then column 2, then column 3 and so on. This can be done manually, but the STM32F103 has 7 DMA channels. Why not let the DMA do all the work? The array of data needed to do this looks like this:

For the first 16 bytes, only IO 1 is made high. The second 16 bytes, IO2 is made high, and so on. This array is just as big as the previous one, and it also increases in size the more brightness levels are used. Luckily this array never changes so it can be stored in FLASH instead of RAM by using the const keyword.

Now for the implementation, which depends on the microcontroller used. I used the STM32F103 as it’s a popular and cheap ARM M3 microcontroller and because ST has the amazing STM32CubeMX that can be used to generate a project with the peripherals already setup. The STM32F103 doesn’t count the GPIO peripheral as an peripheral, so the DMA is setup for a memory to memory transfer. It will transfer data from ledbuf1[] to &GPIOA→ODR, which is the GPIOA Output Data Register. Any value written in that register will be set to the IO pins of GPIO A. The second DMA channel will transfer data from columnchange[] to &GPIOB→ODR. Which is the data output register of GPIO B. The DMA channels are both setup to automatically increase the address of the data to be transmitted but keep the address of the receiving end the same. This ensures the buffer is transferred byte per byte to the same GPIO register. Normally the DMA stops when the buffer is transferred, but then it would only display one frame and after that the LED matrix would be off. To avoid this the DMA is placed in circular mode, in which it repeats itself indefinitely. The STM datasheet says that this is not a valid option for the DMA in memory to memory transfer mode, but it works regardless of what the datasheet says :)

The full DMA settings for channel 1 are:

After all this effort, does it work? Well, a picture should demonstrate is effectively. 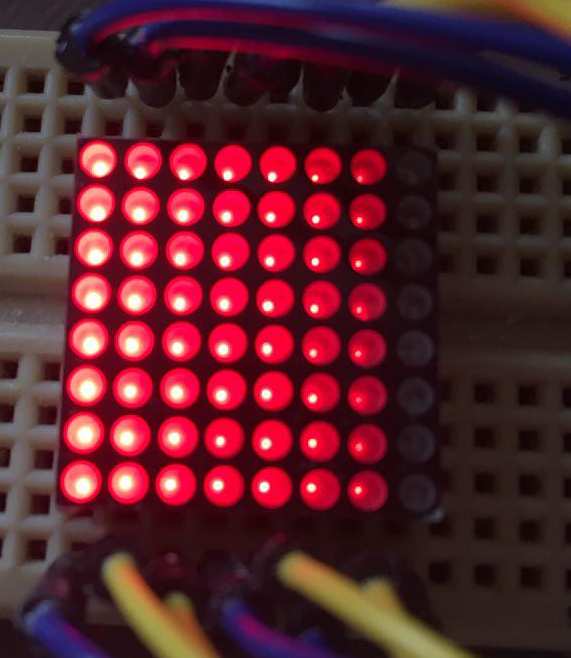 My LED matrix is connected with the cathode on the PWM IO’s, so with PWM IO 8 being 100% on, the cathode is off most of the time, until the column is selected. This results in row 8 being completely off, row 7 a bit on, row 6 a bit brighter and so on. Exactly inverted from the expected results. This can easily be fixed by inverting the PWM array in software though.

And a logic analyzer picture of all the 16 IO’s, 8 PWM and 8 to select the columns:

Manually converting the 8 by 8 array to the PWM array for the DMA is of course not very fun to do. I’ve added the function convertarray() to do the converting steps needed. This function converts a normal 8*8 array to an array the DMA can directly output to the LED matrix.

But, I started talking about animations. So let’s make something a bit cooler. For example, this:

A very simple function is needed to shift the 8*8 array 1 place to the left, do this a few times per second, convert it to an array for the DMA and store it in the same buffer the DMA already uses. The full main() code is:

The one ugly thing is that the 2 DMA channels have to be started at exactly the same time. This is impossible, but it is possible to start them at almost the same time. The function HAL_DMA_Start has a lot of extra checking under the hood, so I created the HAL_DMA_SetReady function. It does exactly the same as HAL_DMA_Start, expect that it doesn’t start the DMA yet, it only sets up the DMA so it knows what to copy to where. To start the DMA I directly set bit 1 in the DMA CCR register, which is much quicker then using the HAL. Not doing this will result in ghosting or other oddities as the two DMA channels will run a bit out of phase, meaning the colums and rows are not controlled at the correct time.

The full code can be found here.

Now time for a prettier animation, now with 64 levels of brightness:

The animation is rather simple, generate a pattern with the outer ring of LEDs mostly off, one ring in a bit brighter, another ring in even brighter and the middle 4 LEDs on the highest brightness. After that just increase the brightness of every ring by one in a loop, setting the brightness very low after a ring reaches the highest brightness. The calcpulse() function takes care of this. After every loop the array is converted and thus the animation is displayed. To change the code from 4 to 6 bit PWM the array to switch the columns has been increased in length and the convertarray function has been changed so it accepts 64 different brightness values instead of 16.

The full code can be found on my github here. I used stm32cubemx to setup and generate the project and OpenSTM32 IDE. The project should import and compile if the same IDE is used.

I have used an stm32f103 nucleo board, the LED matrix is connected with the cathodes of the LED matrix to PA_0 to P_A7 and the anodes to P_B8 to P_B15. All the code is LGPL licensed unless stated otherwise in the file.