First a short explanation what RISC-V is and why I think it’s pretty cool. RISC-V is an open instruction set architecture, basicly it’s an open and free to use description on how to build a CPU. This means that anyone can make a CPU based on the RISC-V architecture and use it with no license costs needed. In contrast, with ARM devices, a license fee is in place as the people behind ARM want to earn some money. This means that RISC-V devices can be a bit cheaper, but there are much more advantages. As RISC-V is open, everyone can make a CPU and as long as it’s implemented correctly, compiled code will work on every device. It also means it’s possible to teach CPU design at schools and make something that can actually be used as compilers and such are already existent. Another advantage is that a more open source CPU is possible, as the HDL that makes up the actual CPU can be open source as well.

Now back to the Lichee Tang, which contains an open source RISC-V CPU inside a Chinese FPGA on a board with a lot of IO. The board has the following:

A few things are interesting, the FPGA is not from a well known brand like Intel or Xilinx, but a Chinese brand called Anlogic. The on board programmer only programs the FPGA, so with the RISC-V softcore an external programmer is needed. So when ordering this board, make sure to buy it with the programmer included. The programmer seems to be a normal FT2232 device, so a different, FT2232 based programmer should also work.

With that out of the way, time to get all the components up and running.

I tested all the steps on a Debian system, so they should work on most Debian/Ubuntu/Mint based systems. I also created a virtual machine with everything setup. It can be downloaded here. The username and password are both  “riscv”

On a clean Debian installation, the following packages are needed and can be installed with the apt install command:
build-essential
module-assistant
git
libftdi-dev
libtool
pkg-config
texinfo
automake
libftdi1-dev
unrar-free
putty

To make everything a bit easier, a Debian virtualbox image can be dowloaded here. It should work in one go with Virtualbox 5.2.22 or newer and lets you skip, well, all of the below steps :) To login, the username and password are both “riscv”

Setting up the toolchain

The toolchain requires the following components:

OpenOCD is next. Navigate out of the e200_opensource folder to Documents or Downloads and clone the OpenOCD repository:

In the OpenOCD folder, execute the following commands to configure and build OpenOCD:

After building openOCD, the files need to be copied to the right directory. The content of then folder “src” in the OpenOCD directory must be copied to: “sirv-e-sdk/work/build/openocd/prefix/bin/” (this is a new folder and has to be created)

With OpenOCD in place, time to download the GCC compiler. It can be downloaded from here.
The latest release ending in centos64.tgz is the correct one, at the moment of writing that is: gnu-mcu-eclipse-riscv-none-gcc-8.1.0-2-20181019-0952-centos64.tgz

After downloading and extracting the archive, the contents must be copied from “riscv-none-gcc/8.1.0-2-20181019-0952/” to “sirv-e-sdk/work/build/riscv-gnu-toolchain/riscv32-unknown-elf/prefix/” (This is a new folder again and must be created)

After this, the map structure should look like this:

With all that done, we are almost ready to compile a project, almost. First a small issue in the downloaded board support package must be fixed. Navigate to “sirv-e-sdk/bsp/env/” and replace the following 3 files from “sirv-e201-arty” to “sirv-e203-lichee”: init.c, link.lsd and platform.h
After replacing these files, in a terminal in the “sirv-e-sdk” folder, the following command should build a demo gpio application that is included:

Uploading software to the board

After all that work, the compiled binary still has to be uploaded to the board. For that, a USB rule has to be added so the debugger is accessible by the user, else only root can upload binaries to the board. First, the user must be added to the plugdev group using

After that, a new file has to be made in the udev rules folder using the following commands:

This opens the nano editor in the right directory

Press ctrl+x to save the file. After this a reboot is needed before continuing. After a reboot, plug in the external debugger with the board connected to it as follows: 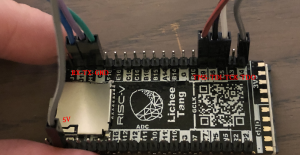 In a terminal in the “sirv-e-sdk” folder, the following command will upload the compiled binary

With the FT2232 debugger connected, open Putty and connect to the serial port at 115200 BAUD, generally ttyUSB1, but check with “sudo dmesg” After uploading the binary and resetting the board, you should be greeted with the following: 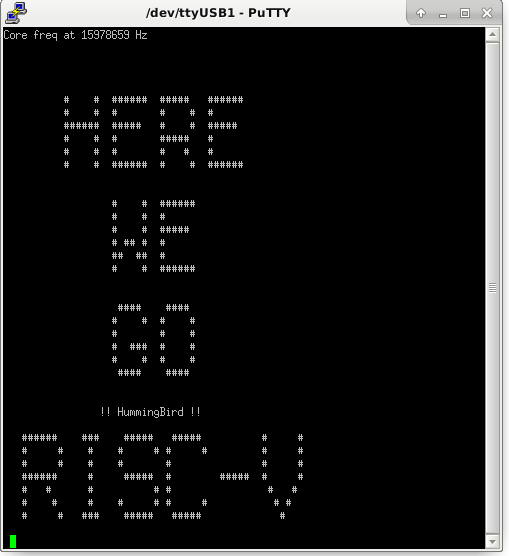 The demo_gpio application is one, but it’s nice to be able to add a project to work on. To do so, it’s easiest to start with the demo_gpio project located in “sirv-e-sdk/software/” and make a copy. Rename the folder to something else, for example “hello_world”. Inside this folder, the makefile has to be changed a bit, the first line has to be changed from “TARGET = demo_gpio” to “TARGET = hello_world” (or how the new project is called). After that the project can be compiled using the following command:

As this is all makefile based, working with this SDK requires some make knowledge. If you are not familliar with makefiles, it’s best to look at a good online tutorials like this one.

As the Lichee Tang has an on board debugger, this one also needs a udev rules file to make sure non root users can access it:

This opens the nano editor in the right directory

Press ctrl+x to save the file. After this a reboot is needed before continuing.

The software enviroment for the FPGA can be downloaded here. It’s a rar file and to extract it, the following command is needed:

After extracting it, the binary has to be made executable

After this, the IDE can be started using the command “./td –gui” and you should be greeted with this: 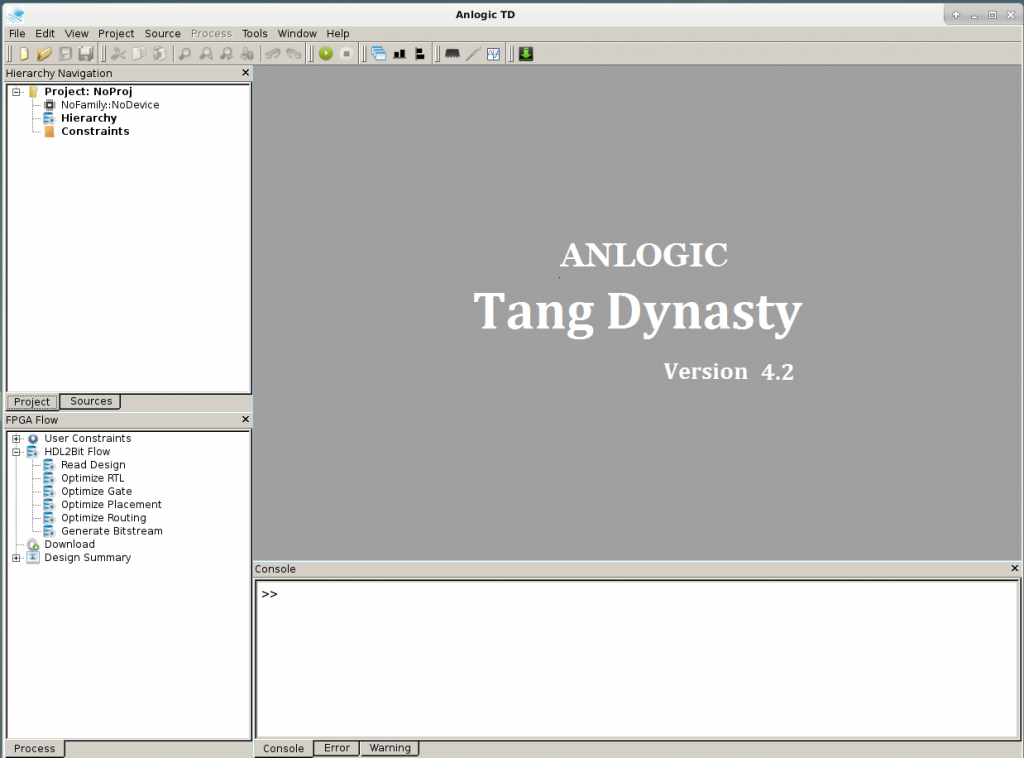 In the TD FPGA IDE, the project is loaded by selecting “project -> open project” and opening the “e203egmini_new.al” file in “Tang_E203_Mini/project/”. After opening the project, it is build by double clicking on HDL2Bit flow in the bottom left. Synthesizing a complete microcontroller takes a while, so now is a good time to grab a needed cup of coffee. After that is all done, plugin the Lichee Tang using the USB connector on the board. In the TD FPGA IDE, double click on “Download” and it should find the FPGA board. Add the binary “e203egmini_new.bit” by pressing on add, then press on run and the upload process starts. For me it tends to hang a minute or so on 98%, so don’t get too impatient.

Final words, useful links and how to write code for the Lichee Tang

It took some effort, but a working toolchain for the CPU and for building the actual CPU are setup. I had a lot of help from the sipeed telegram channel, which is there for support for the Lichee Tang and other Lichee products.A few helpful things for working with the Lichee Tang. First of all, the schematic of the board, for figuring out what is connected to what. (todo) Second, the RISC-V CPU used is based on the e200 core from SI-RISCV, the peripherals for UART, GPIO and so on seem to be copied from the SiFive HiFive1 microcontroller as all the registers match. This means the guide for the SiFive HiFive1 microcontroller can be used when working with the peripherals.

This blog post only mentioned on how to setup the tools as I ran into some issues with it, now it’s time to write some code and maybe talk about that next. Let me know what you want me to try on this interesting board.